(Los Angeles, CA—September 27, 2019) —King Street Pictures has launched the new trailer for its highly-anticipated release HEAVENQUEST: A Pilgrim’s Progress. The film will release exclusively on the official Heavenquestfilm.com website for a special limited time 48 hour digital premiere launch starting on October 25, 2019. During the digital premiere, viewers will have the opportunity to watch HEAVENQUEST three months prior to its traditional worldwide release on all platforms starting January 2020. The project was ignited by visionary filmmaker Matt Bilen who approached Executive Producer Darren Wilson (FATHER OF LIGHTS, HOLY GHOST) with a grand idea for a faith-based, fantasy film.

“Over the last decade of making my genre-busting documentaries, Matt Bilen has been by my side every step of the way. So it was no surprise to me that he would attempt something as outlandish and ambitious as HEAVENQUEST for his first feature,” said Darren Wilson, Executive Producer of HEAVENQUEST, “For this film, he not only had a smaller budget to work with than most of my documentaries, but he broke nearly every rule for first time filmmakers: don’t shoot at night, don’t shoot in many hard to reach locations (they hiked up miles into desolate mountains and deserts), don’t shoot without a script, don’t make a fantasy film that requires elaborate costumes, extras and Visual Effects (they did over 150 VFX shots) …the list goes on and on. But I think what people will see when they watch this movie is something that comes from a place of true passion. The people who break artistic rules are typically the ones who are forced by their own ideas to birth something unique to the world. Matt’s definitely done that with this movie.”

“I really wanted to do something a bit different in the faith film space and felt building a new immersive fantasy world around the set pieces and characters of The Pilgrim’s Progress would allow me to push some boundaries and try some new things,” said Director Matt Bilen. “Yes, it needed a new vision and some reimagining, but that’s what I tried to do. It’s all there in that classic Bunyan story, but we wanted to build a world where we could tell something relevant and gritty that would resonate with contemporary audiences.”

HEAVENQUEST is a new, reimagined fantasy universe inspired by the world and characters of John Bunyan’s timeless masterpiece The Pilgrim’s Progress, but modernized and adapted for today. This film is an imagined prequel to Bunyan’s original text, exploring the origins of the character The Evangelist (renamed Vangel in this world) and how he came to be a wise sage, and it sets the stage for the journey shared in Bunyan’s beloved allegory, but recasting the events against an expansive new world ravaged by a war between good and evil. Bunyan wrote The Pilgrim’s Progress in 1678 while he was in prison for holding religious services. Considered the first novel ever written in English, the book has never been out of print, it has been translated into more than 200 languages, and is considered the second most-read book after the Bible.

The film is a true experiment in filmmaking. Bilen has achieved the impossible in creating his feature-length directorial debut: he made a faith-inspired epic fantasy film with only micro-budget; a few crew members; a diverse international cast; extreme outdoor locations with THE REVENANT style time of day natural lighting; and no script other than a working treatment. 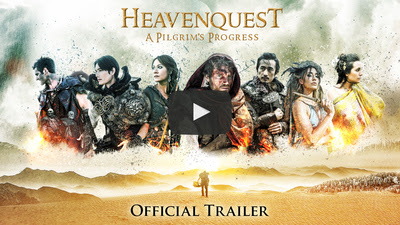 As the underlying story is acclaimed around the world, the filmmakers were intentional in securing an international cast of actors who had already been impacted by the story. The film stars Korean superstars In Pyo Cha (“D-Day”, “Sense8”) and Ricky Kim (“Law of the Jungle,” “Oh! My Baby”); Karyme Lozano (“Tres Mujares,” “El Manantial”) and Ferrnanda Romero (THE EYE, THE BURNING PLAIN) from Mexico, Australia’s Peta Sergeant (“Snowfall”, “Once Upon a Time in Wonderland”), and American actors Patrick Thompson (“The Return”, “Living with Frankenstein”) and Alan Powell (“Quantico”, THE SONG).
HEAVENQUEST shares the story of a man named Vangel who is thrust on a journey against his will. There is a war between the Northern and Southern Kingdoms of Eos, and Vangel has been mysteriously arrested. Brought to the Southern King and sentenced to death, Vangel escapes and flees North. Armed only with a book called The Record of the Ancients that he receives from a wise sage, Vangel embarks on an adventure through haunted forests, dark swamps, and enchanted mountains. Along the way, mysterious travel companions assist him, sharing about a fabled good king and pushing him onwards towards the Wicket Gate, the gateway to the North, while enemies lurk at every corner trying to derail him from his path.
Learn more about HEAVENQUEST, view the new trailer and get your ticket for the digital premiere at: Heavenquestfilm.com.
About King Street Pictures: King Street Pictures develops and produces diverse, forward-thinking independent films and television shows for the global marketplace. Founded in 2016 by producers Dan Mark (“Snakehead” and “Fiction and Other Realities”) and Rachel Tan (“Always”), veterans of the entertainment industry with major studio backgrounds and deep ties to Asia, King Street Pictures has a mission to champion new diverse voices in film and television, change perceptions for the next generation, and shape culture from Hollywood to the rest of the world.
About Rhonda Frye 324 Articles
Throughout her career and ministry, Rhonda has served at SGNScoops.com, GospelMusicUpdate.com, and SouthernGospelUpdate.com (as Editor in Chief). She has also published articles in Singing News Magazine and CCM Magazine. As a music journalist, Rhonda interviewed numerous well-known artists (such as Bill and Gloria Gaither, Larnelle Harris, Phillips Craig & Dean, Jason Crabb, and many more). She has also covered the GMA Dove Awards, KLove Awards, The National Quartet Convention, Harmony Honors, GMA Hall of Fame, and other special events. Rhonda is also a songwriter and worship leader.
Website Facebook Twitter

Nashville, TN… (February 19, 2020) – TobyMac’s HITS DEEP TOUR is giving back to cities across the U.S.. In partnership with tour sponsors KLOVE/Air1, Awakening Events and Altrua HealthShare, they have been working with the […]